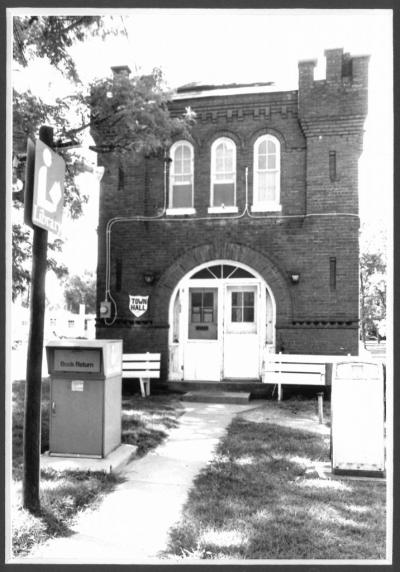 The story of the North East Branch Library is the embodiment of decades of work by people who wanted more for their community. The roots of this dedication can be traced to a determined group of local women who in 1950 petitioned the county to fund a branch of the Cecil County Public Library (CCPL) for the town of North East.

Acquiring funds to be open for four hours a week, the Young Women’s Civic League was formed and worked with CCPL to convert the floor above the town jail into a library. Opened in 1952, the library was a tiny 300 square foot room with 2500 books and seating for three, including the librarian.

Andrea Pugh, Vice Chair of the Friends Foundation, former CCPL Board of Trustees President and current member of the Women’s Civic League of North East recently shared, “My first job was working at the North East Branch when it was over the jail. I was paid $.50 an hour!”

Kathy Styer, a librarian at the branch throughout the 1980s, recalls feeling she could reach out and touch nearly every book in the collection from her desk. Opening and closing was a one-person job. “I remember emptying that little book drop out front,” Kathy recalls. “Putting books in a big bag and hauling them up those steps was something! That book drop stayed around for a long time until we had to replace it when it was washed away in a hurricane.”

Plans for a larger branch were realized in 1991 with the opening of a 2800 square foot library. Open twice as many hours with a public meeting room and enhanced access, the new building provided room for programming, computers and a collection of 20,000 items.  Today, the branch is as close to the heart of its community as ever.  Welcoming 40,000 visitors and circulating 100,000 books and other materials annually, in addition to providing well over 100 educational programs for youth, North East’s well-loved library is once again bursting at the seams.

Scroll through our album of North East Library History photos to see the library from its earliest days to the current location. 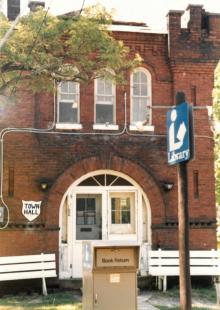 The original town hall, circa 1970, included the police station on the first floor and the cozy 300 square foot library on the second floor.

Although no longer in use, the 130-year-old building that housed the original library maintains historical significance.

The Women’s Civic League of North East was instrumental in starting the original library in the 1950s. 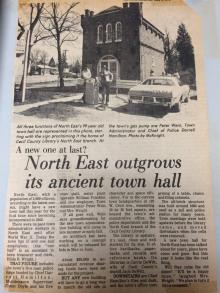 Built in 1880, the original town hall housed town offices, the police station, and the library until the 1980s. (Photo credit: Cecil Democrat, 1979)

Awaiting the groundbreaking for the library and the police station in February 1991. 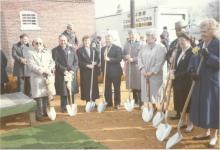 Local dignitaries, including former dignitary Linda Brammer (third from left) prepare for the groundbreaking in February 1991.

Installation of the Trusses 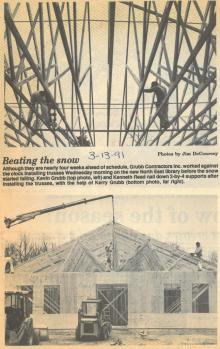 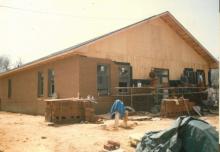 Finishing the brick façade on the current branch in summer of 1991.

The North East Police Station and Library Under Construction

The North East police station and library under construction in July 1991. 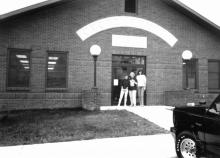 Current North East branch library at its opening in 1991

Current North East branch library at its opening in 1991

Hear about all of our upcoming events, programs & more! Read the current issue.